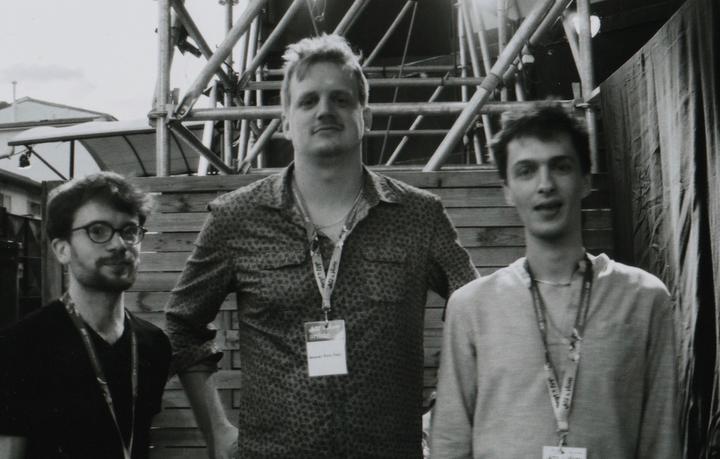 It was the trio of the Toulouse pianist Amaury Faye (piano) passed by the Berklee College of Music, with Louis Navarro (bass) and Theo Lanau (drums) he returned to close the stepping stone. I can reread my notes written in the dark of a writing as uncertain as I can read, I can not find anything about them and while I write this report in the TGV, an eye on the perpetual wave of Mount Ventoux that goes far away towards Lure and the High Country of Giono, I find in my memory only the memory of a pianistic ease and a melodic naturalness which gave to this music a false air of simplicity, however by no means lazy. President Kyle showed a particular interest for his young colleague Louis Navarro, we spoke about the quality of the overall sound, it was recalled that Amaury Faye had just won the Rezzo-Focal springboard at Jazz in Vienna and therefore the invitation to record an album at the Studio du Flon de Lausanne. And finally, the performance of the pianist was rewarded with an instrumentalist prize. Proclamations, cheers, distributions, separation before the final concert of President Kyle tonight at the Cloister of the Carmelites at the same poster as the singer Virginie Teychené. 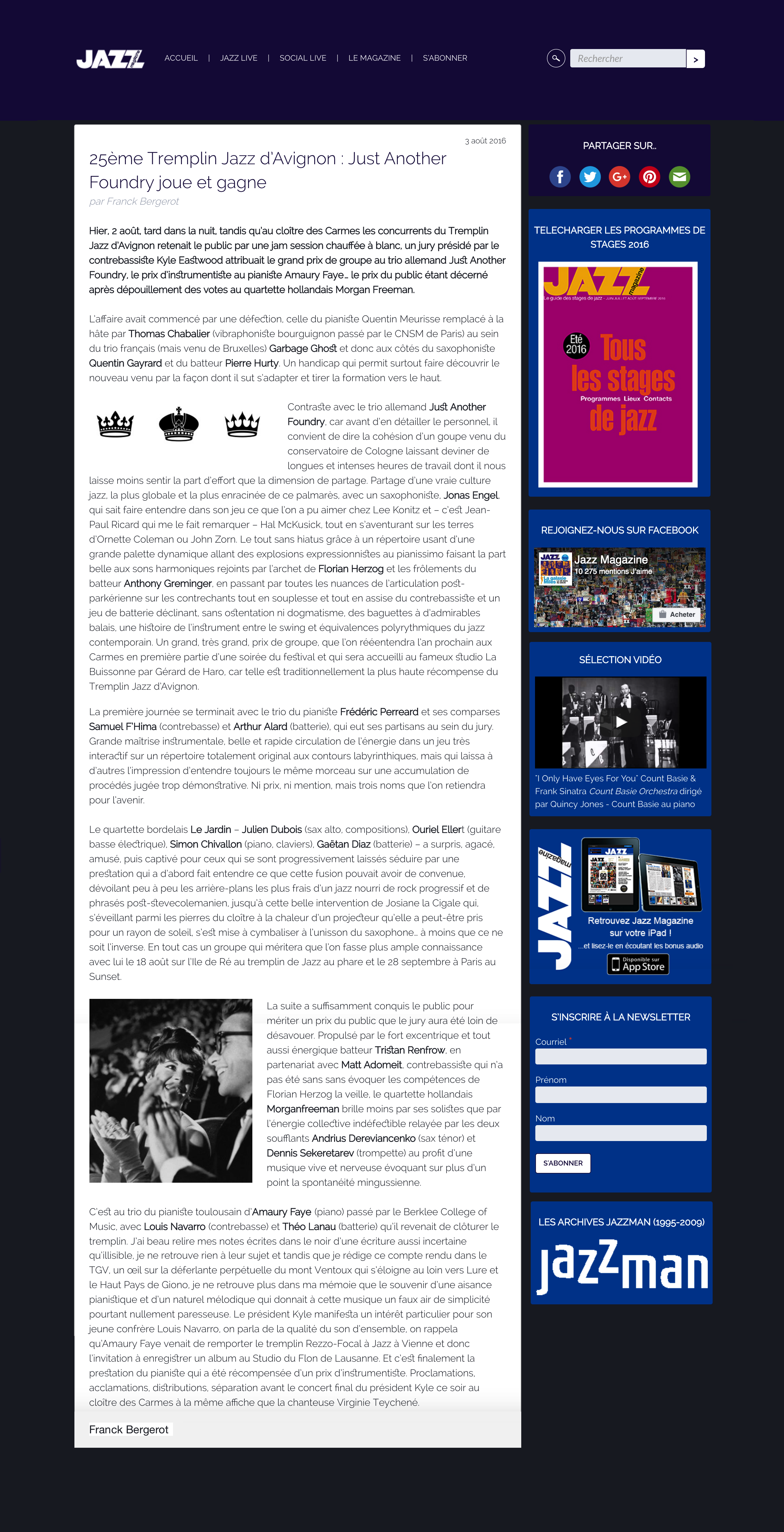 Today in the Schwäbische Zeitung:

Young Swiss band "Shane" wins the International Jazz Competition  BIBERACH - In a field of applicants that is seldom as international and high-caliber with more than 40 formations from nine European countries, this year's Biberach Jazz Prize for young jazz musicians was once again able to win over a formation from the Swiss jazz factory in Bern with "Shane" from Steffisburg.

In a heart-stopping finale in the Biberach Stadthalle, the young Swiss were just ahead of the audience favorites, the "Amaury Faye Trio" from Brussels, and received a certificate and prize money of € 2,000 from jury chairman Dieter Ilg.

To shorten the waiting time during the jury meeting, echo prizewinners Joo Kraus offered trumpet and loop station in a duo with the award-winning Freiburg Professor of Jazz Piano Ralf Schmid in a short concert entertaining samples from their extensive Œvre.

After a brief look into the history of the Biberach Jazz Prize by cultural director Klaus Buchmann and the jazz club jury member Helmut Schönecker, the award ceremony began. Dieter Ilg, who will receive his third echo prize in a row as "Instrumentalist of the Year" in Hamburg next month, praised "Shane" especially for the fact that they already faced a special challenge with a quartet formation without a harmony instrument , The associated stylistic and structural requirements were, however, mastered excellently. A powerful double bass playing (Jérémie Krüttli) and a relaxed and filigree with good structuring and subtle accents rhythmically multi-layered percussion (Philipp Leibundgut) laid the basis for transparent structures within which the two saxophonists Gabriel Wenger and Michael Gilsenan unfold their plastic melodies and virtuoso improvisations , Especially Gilsenan, who was also responsible for all compositions, developed in his rhetorically influenced game wide tensions of great individuality and depth.

The Munich cultural journalist and curator of the BMW World Jazz Award Oliver Hochkeppel, who traveled directly from the "jazzahead!" Trade fair in Bremen, presented the second prize with witty words in football jargon to the trio of brilliant jazz pianist Amaury Faye from Brussels, which had previously received the Audience Award for his impressive performance.

Professor Frank Sikora presented the Composition Prize, which he himself donated in conjunction with the third prize, to the Jannis Wolff Quintet. In his out of respect for the musicians in English reasoning he referred to the high compositional complexity of the presented three-part suite as well as to the experimentation, originality and expressivity of musicians from Hungary, Ecuador and Slovenia around the German drummer Jannis Wolff, who are in Rotterdam and got to know Copenhagen during their studies.

The Mannheim university professor Jürgen Seefelder thanked the presentation of the fourth prize with words of praise for a perfect retro-style of the 40s and 50s presentation of the "Pascal Bartoszak Quartet" from Cologne and Essen under the motto "Back to Trad" had the group, which emerged from the NRW State Youth Jazz Orchestra, released their first CD in 2015, but in the opinion of the jury the path was taken in the wrong direction.

The fifth prize finally went to "moment's concept" from Leipzig, whose highly interesting concept from the realm of performing music in the competitive situation might leave little room for the spontaneity of the moment. 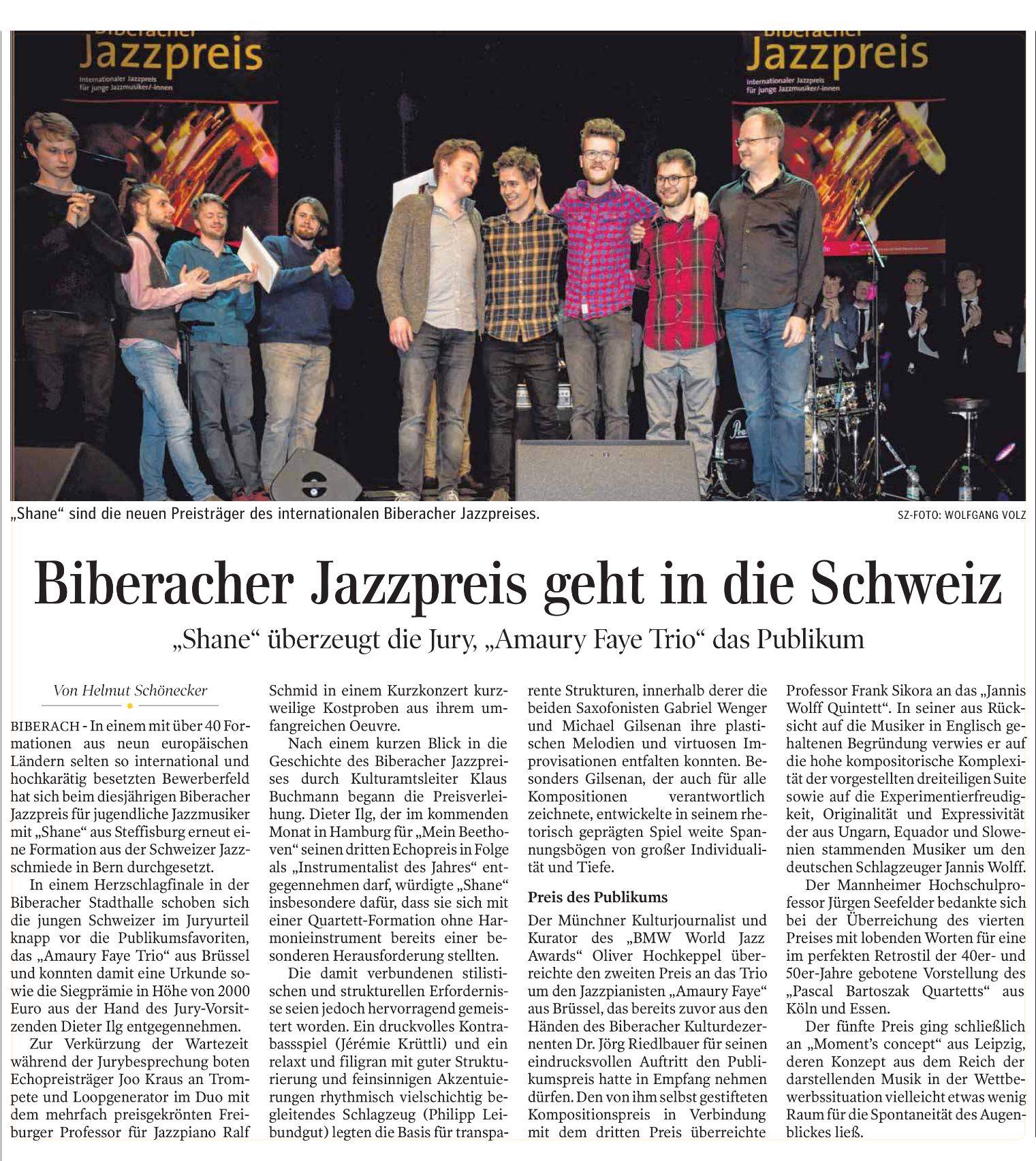 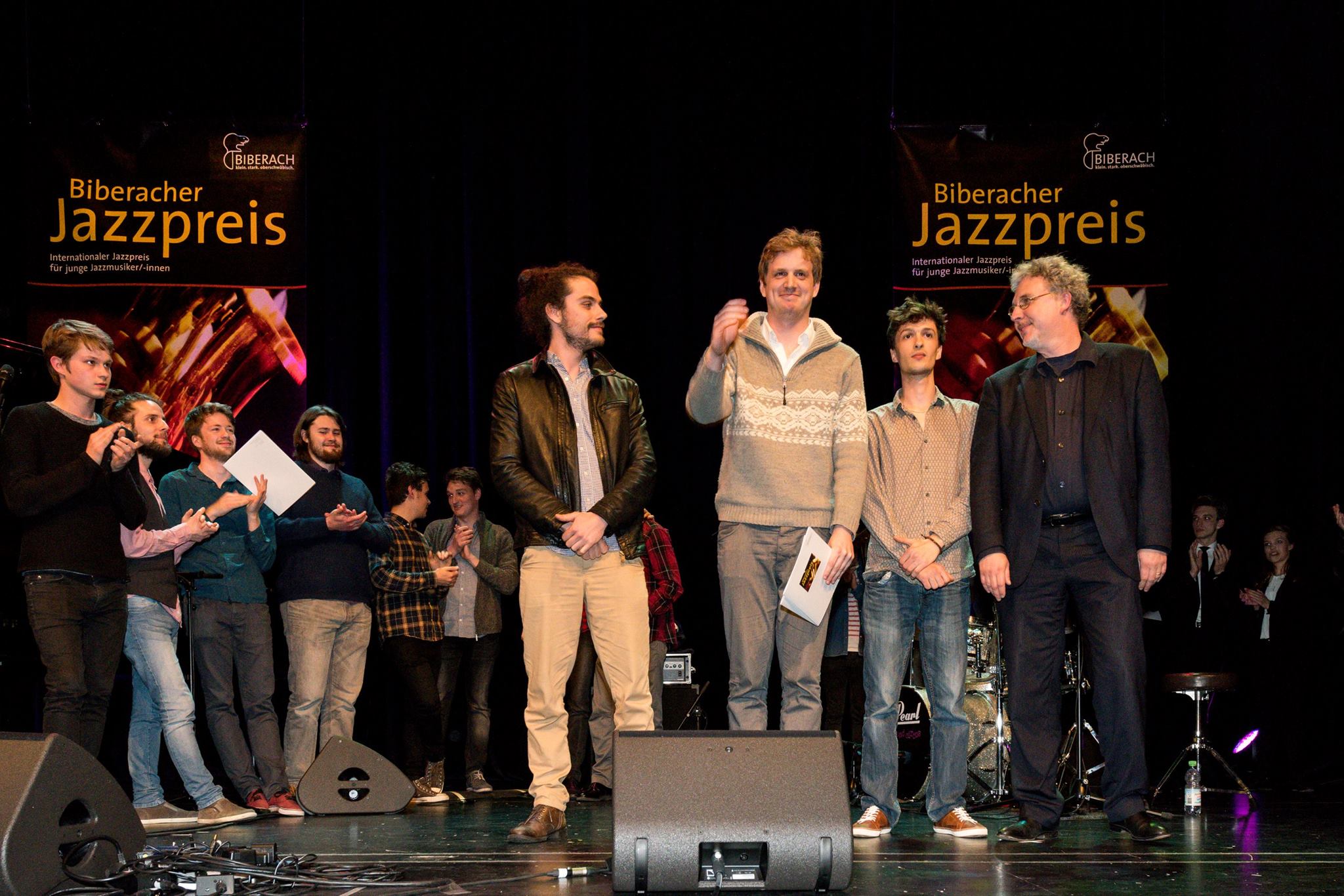 Defined by the critics as unique for its ability to combine together elements of contemporary French music (Debussy), German and Polish Romanticism (Schumann, Chopin), and European and Eastern African rhythms was born in Toulouse, France in 1990, Amaury Faye, with his American jazz trio, he is following a path experimented by one of his idols, Brad Mehldau.

His style is full of talent that allows him to incorporate elements of his new influences, including Tigran Hamasyan, nominated for the Grammy Kneebody, and the different musicians of the current music scene in New York. Amaury Faye, makes of the background, composed of various experiences and important influences, a very personal, profound and unique universe.

Faye emerged to criticism thanks to the ensemble of the French collective, Initiative H, of which she was a part of the early days is currently gaining notoriety in Europe. Ensemble with French saxophonist David Haudrechy (Archie Shepp, Rick Margitza), has released a first album (Deus Ex Machina, Neuklang 2013) and is preparing to record a second recording experience, Dark Wave, Neuklang, whose release is scheduled in 2015, he recorded the extraordinary participation, as guests, of some of the best musicians in Europe. In 2013, the ensemble won a finalist position at the Concours National de Jazz de la Défense in Paris, one of the best European jazz competitions.

At the age of 20, Amaury Faye released a first album of standards and originals (Big Moe Trio, Greenworks 2010) with Louis Navarro (bass) and Pierre Ardre (drums). Inspired by Oscar Peterson's musical universe, Hank Jones , Kenny Barron, Faye decided to record his first album in the traditional way, using vintage materials and spending only two days in the studio. The album is currently distributed in Europe and Japan. Three years after its publication, the trio was nominated as a finalist in the French jazz competition Jazz en Baie 2013.

In 2014, Faye moved to Boston, United States to study at the prestigious Berklee College of Music with world-renowned musicians such as Joanne Brackeen and Tia Fuller.

In March of this year Faye received the Berklee Jazz Performance Award 2015 as best jazz pianist. Being a disciple of Joanne Brackeen has been a deeply stimulating experience, allowing Faye to reach higher levels of musical commitment. 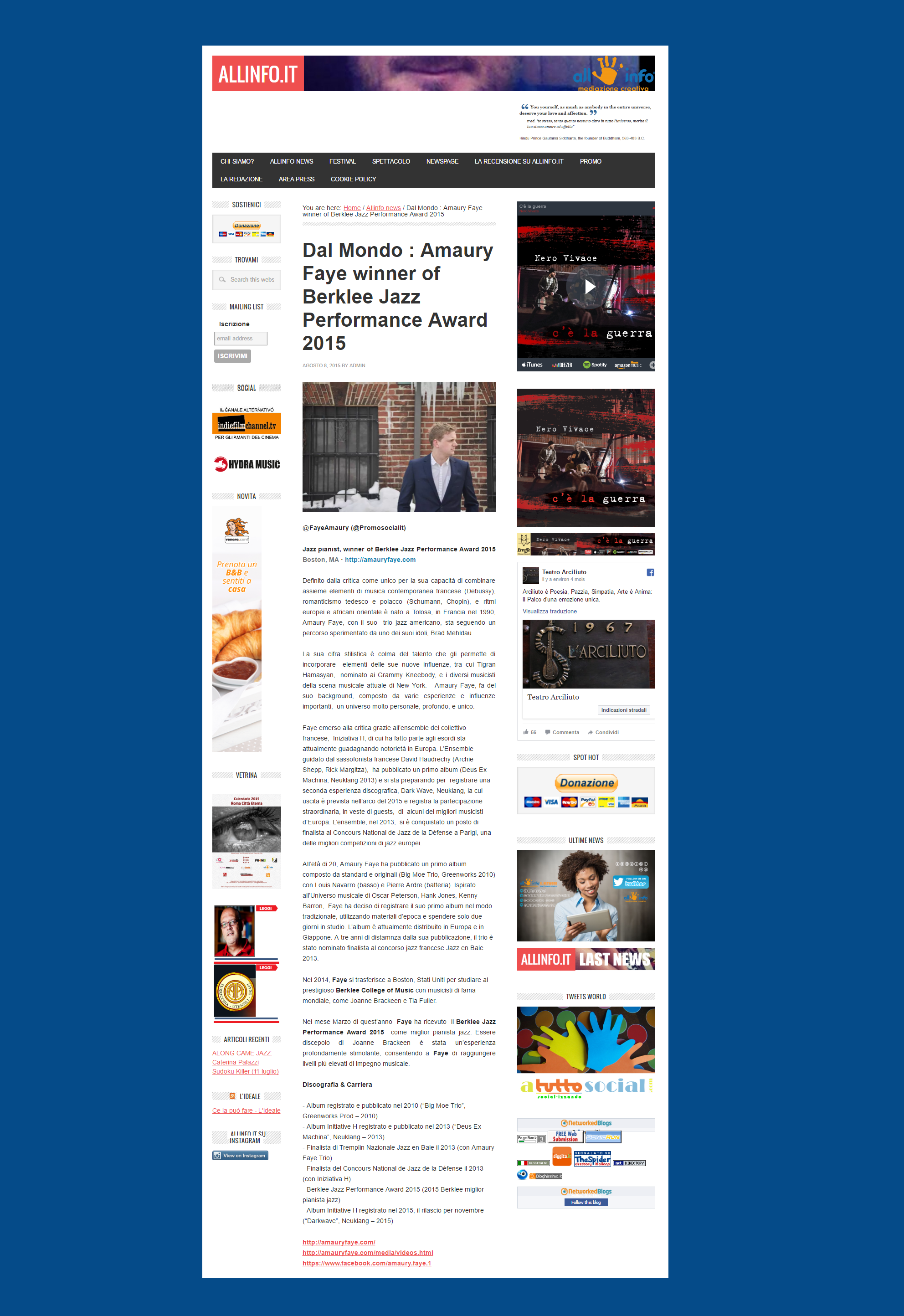